Last summer, I went to Tenerife, one of the Canary Islands in Spain to attend an ESWC2008 (European Semantic Web Conference), where I've presented my research paper in the conference symposium. I have been there for a week from 30 May till 6 June. The program starts on 1st June, so I got a day and half to explore the island. Tenerife is one of the Canary Islands in Spain and considered as one of the famous tourist attractions especially to British. It is famous with its hot weather and they said its spring all the year round, mainly not because it’s only got spring seasons but because some parts of this island is tropical, so like Malaysia, where we can find flowers bloom every day except that the weather here was hot and dry compared to Malaysia.

In Tenerife, the Las Canadas National Park has constantly attracted the tourist with its unique geographical structures and eccentric scenery resembling those in cowboy movie. Mount Teide which is the highest mountain in Spain also situated in this area, once an active volcano that destructed a town in early 1700s. The last eruption was in 1909 and 'is sleeping' right now. There is a cable car available to the summit of Mount Teide from where, spectacular views of Tenerife and neighbouring islands can be enjoyed. You can see the mountain at the background in my photo with that strange looking rock – the Roque. 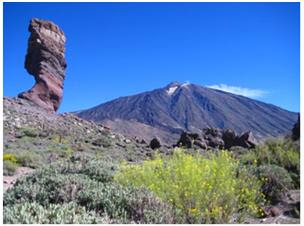 I've joined a day trip to round the island and have visited the National Park area. The lava from the erupted mountain was in various sorts making some of the soils’ colour in black like fertilizer. The area looks like another planet or on the moon, which is why the films’ producers or directors chose this place as location to film Star Wars and Planets of Apes - I smiled to myself, how they tried to trick us with these surroundings. All these are created by Allah, we the human just make used, or changed or destroyed them in the names of creativity, productivity or development.

Looking into the amazing Mount Teide which covered with snow at the summit make me adored the beautiful scenery it’s made and who knows the mountain in that beautiful scenery would harm and destroyed the area and its people?. Well, With hot fire and lavas, its could have destroyed anything even the eyes that worshipped it... its remind me of previous ummah during our previous Prophet before the Prophet RasuluLlah SAW, that used to worshipped all these things but Allah, who use to be proud of themselves but at last destroyed, vanished in a split second by Allah’s command. Though this is not the place of that story in al-Quran but all this should remind us, as a sign for whoever is thinking or who want to think about these creation and related them to the Creator!. As mentioned in Surah Ali-Imran:190 : “Verily! In the creation of the heavens and the earth, and in alteration of night and day, there indeed signs for men of understanding”, may we all include in those people, insyaAllah.

Sleeping mountain like a sleeping giant when it wake-up and erupted, one time it is considered as natural disaster but then, the left of it, the lavas made the land and soil suitable for growing crops which could benefit the future generation. MasyaAllah, “Then which blessings of your Lord will you both (jinn and men) deny? (Surah Ar-Rahman). The scenery from above is so beautiful, masyaAllah to see a cloud blend with the pine forest surrounding the mountains seem so near but yet still cannot be touch. 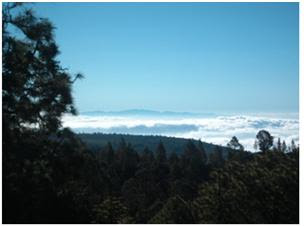 The trip continue to another natural historic place, a village that has been destroyed by the Mount Teide explosion years ago. I also joined one of the cruise excursion to catch and watching dolphins and whales swimming in the Atlantic ocean... till then to be continued :)