Who Is Zainab Al-Ghazali? 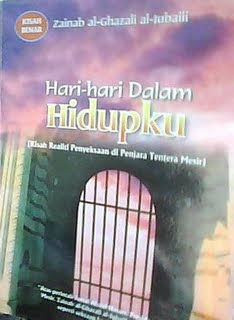 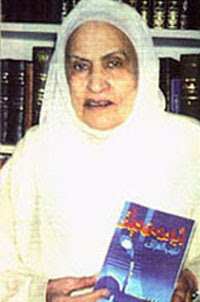 Zaynab al-Ghazali is a woman of another kind. Like Aisha Abd al-Rahman, she is Egyptian and defends the rights of Muslim women in accordance with what she perceives to be the correct Islamic doctrine, and like her she is the daughter of an Azhar-educated father. But she has been an organizer of women and an Islamic activist, rather than an Islamic scholar. Early in her youth, she was an active member of the Egyptian Feminist Union, founded by Huda al-Sha`rawi in 1923. She resigned her membership in disagreement with the ideas and ideals of the women's liberation movement and, at the age of eighteen in 1936, she founded the Muslim Women's Association in order to organize women's activities according to Islamic norms and for Islamic purposes.

The Society of the Muslims Brothers, founded by Hasan al-Banna in 1928, was thinking of creating a division of the Muslim Sisters at the time, and Hasan al-Banna asked Zaynab al-Ghazali to head that division and incorporate into it her new Muslim Women's Association. She and her association's general assembly rejected the offer, but promised cooperation. After the Society of the Muslim Brothers was dissolved in 1948, she gave personal pledge of allegiance to Hasan al-Banna in 1949 to support him and back his efforts to establish an Islamic state. Though he was assassinated soon afterwards, she continued her personal allegiance to his successors in the society and helped their members, particularly after they went underground during Abd al-Nasir's regime in the 1950s and 1960s.

In an interview at home in Heliopolis, Egypt in 1981 Zaynab al-Ghazali said:


Islam has provided everything for both men and women. It gave women everything--freedom, economic rights, political rights, social rights, public and private rights. Islam gave women rights in the family granted by no other society. Women may talk of liberation in Christian society, Jewish society, or pagan society, but in Islamic society it is a grave error to speak of the liberation of women. The Muslim woman must study Islam so she will know that it is Islam that has given her all her rights.
This is the core of Zaynab al-Ghazali's thought regarding the status of women as expressed in her public lectures and her articles in al-Da`wa magazine, for which she was editor of a section devoted to the ideals of a good Muslim home. The thrust of her activism and that of her association is an educational one: to instill the doctrines of Islam in women's minds, teach them about their rights and duties and call her change in society leading to the establishment of an Islamic state which rules by the Quran and the Sunna of the Prophet.

Zaynab al-Ghazali believes that Islam permits women to take an active part in public life, to hold jobs, enter politics and express their opinion. She believes Islam permits them to own property, do business and be anything they wish to be in the service on an Islamic society. Yet she believes that a Muslim woman's first duty is to be a mother and a wife, and that no other activity should interfere with this role of hers, for this should have priority over everything else. If she has free time to participate in public life after her first duty is fulfilled, she may do so because Islam does not forbid her.

Zaynab al-Ghazali strongly believes in the religious and social duty of being married. In her first marriage, her husband did not agree with her Islamic activism and so she got a divorce in accordance with a marriage precondition. Her second husband was more understanding and undertook in writing to assist her and never to prevent her from fulfilling her mission in the service of the Islamic cause. In her autobiographical book, Ayyam min Hayati, she tells how, though worried about her, her husband continued to support her in her activities; she emphasizes, however, that she never neglected him or her family duties, even as she continued to be president of the Muslim Women's Association, to work long hours at its headquarters and to be personally involved in the clandestine activities of the Society of the Muslim Brothers. After her second husband's death, she felt that she had done her duty in marriage and was free to devote all her time to the cause of Islam.

Like many Muslim activists disenchanted with the 1952 Egyptian revolution which many of them supported at the beginning, Zaynab al-Ghazali considered Abd al-Nasir and his regime to be enemies of Islam. After some members of the Society of the Muslim Brothers were sentenced to death and many others imprisoned, she started programs to take care of their orphans and widows, to cater to the needy and unemployed among those released or at large, to help their families and in general to sue her position as president of the Muslim Women's Association to do social work that was greatly needed. She also intensified her educational activities and participated in secret Islamic study groups guided by the leadership of the Muslims Brothers in prison. By 1962, she had established contact with Sayyid Qutb in prison through his two sisters and received his approval of an Islamic course of readings in commentaries on the Quran and the Hadith as well as in Islamic jurisprudence. She also received from him sections of a book he was writing in prison, later to be published under the title Ma`alim fil Tariq.

Pages from this book and instructions from Sayyid Qutb in prison, along with the set verses from the Quran, would be studied by groups of five to ten young men meeting at night in the home of Zaynab al-Ghazali or elsewhere. Discussions followed and views were established and opinions formed. With the agreement of Sayyid Qutb and the Muslim Brother's leadership, it was decided that this Islamic training program should continue for thirteen years, which is the duration of Prophet Muhammad's call in Mecca before he moved to Medina and established the Islamic state. It was also decided that at the end of this period, a survey would be conducted in Egypt to find whether at least 75 percent of Egyptian men and women were convinced on the necessity of establishing an Islamic state. If so, they would call for one; if not, they would continue their study and learning for another thirteen years--this to be repeated again and again until the nation was ready to accept Islamic rule, implementing Islamic law in accordance with the Quran and the Sunna of the Prophet.

When the Egyptian government became suspicious and these secret groups looked to it like seditious political cells, a crackdown on Muslim Brothers took place in 1965. Muslim Sisters were not spared, the Muslim Women's Association was dissolved, and Zaynab al-Ghazali among others, was imprisoned. She was brought to trial with several others in 1966 and sentenced to hard labor for life, but she was released in 1971. In the open Islamic resurgence in Egypt which became stronger after the death of Abd al-Nasir in 1970 and since Sadat replaced him as Egyptian president, she was continued to be an active speaker and teacher of Islam, calling for the establishment of an Islamic state as the ideal toward which all Muslims should strive in order to have a society which is divinely guided by the Quran and the Sunna of Prophet Muhammad.

Zaynab al-Ghazali's ideas regarded the would-be Islamic state are very general and lack specificity on many points. Her believe in it, however, is no weaker for that reason. She believes there is no Islamic state on earth at present, i.e., one totally bound by the Shari`a and implementing it fully; not even Pakistan or Saudi Arabia qualifies to be called an Islamic state in her view. She supports the Iranian revolution and hopes its regime will soon become settled so tat it can devote its efforts to solving its internal and external problems. The penal code of the Islamic Shari`a should not be applied now, but it should rather be postponed until an Islamic state is established and the Shari`a can be fully implemented. Allegiance should be given to an Islamic ruler by general election or by the group traditionally knows as ahl al-Hall wal `aqd who are honest, wise, experiences and righteous people who, according to her, could be chosen, appointed or elected, no specific system being involved. She believes Islam forbids that the headship of the Islamic state be a hereditary position. One who is head may be called a caliph or a president, and it is conceivable that there could be two caliphs at one time because of the expanse of the Islamic world; but the two should be united and their two armies should fight for the same cause. A caliph should have a council of advisers who are experts in various fields so that he can remain trustworthy and acceptable to the people who elected him. According to her, Islam does not accept a multi-party system because it has its own self-contained system, the Muslim people having the right in it to chose their ruler and the duty to obey him so long as he adheres to the true path of Islam. Other systems or regimes are man-made and inferior to Islam's, which is made by God. Non-Muslim believers will be treated by the Islamic state in accordance with the prescriptions of the Quran and the Sunna, and non-believers likewise. Zaynab al- Ghazali believes the Islamic system will bring justice to everyone, but Muslims must first be united. There can be differences of opinion among Muslims on issues over which their ranks will not be divided: they may differ on means but not on ends, where the goal should always remain unity.
siswihaluan
Dicatat oleh Siswi Haluan di 8:32 PG Tiada ulasan: